NEAR Irradiation Station for R2M 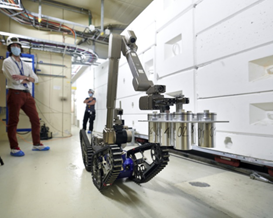 A new parasitic, mixed-field, neutron-dominated irradiation station has been commissioned at CERN in June 2021. The station is installed at the NEAR area of the Neutron Time-Of-Flight (n_TOF) facility, taking advantage of the intense secondary radiation produced by the neutron spallation target (see Figure 1).

Figure 1: the new NEAR irradiation station.

This highly versatile irradiation station allows radiation damage studies on materials to be performed in irradiation conditions that are closer to the ones encountered during the operation of particle accelerators; the irradiation tests carried out in the station are complementary to the standard tests, usually performed with gamma sources. Commercial lubricants, in the form of fluid oils and greases and elastomeric O-rings are among the studied samples.

At NEAR, samples are exposed to neutron dominated doses in the MGy range per year, with minimal impact on the n_TOF facility operation. The station has twenty-four irradiation positions, each hosting up to 100 cm3 of sample material.  The irradiation positions are organized in two shelves, allowing different combinations of absorbed doses and dose rates to be explored. Absorbed doses are measured in eight reference positions by use of Radio-Photo-Luminescence dosimeters, in collaboration with the High Level Dosimetry within the R2E Project.

Due to the residual activation of the whole area around the n_TOF target access to the irradiation station is forbidden to human operators even when the n_TOF facility is not in operation. Robots are used for the remote installation and retrieval of the samples, and other optimizations of the handling procedures were developed in compliance with radiation protection regulations and the aim of minimizing doses to personnel (see Figures 2-4)

The sample containers were designed to be radiation tolerant, compatible with remote handling and subject to detailed risk analysis and testing during their development. The whole life cycle of the irradiated materials, including their post-irradiation examinations and final disposal is considered and optimized.

First irradiations were completed between July and November 2021 on a selection of commercial lubricants and EPDM elastomers for use in high-radiation areas at CERN, irradiated at doses ranging between 0.4 and 0.8 MGy (see Figures 2-3). An irradiation campaign foreseen for 2022 aims at irradiate samples at higher doses.

Figures 2, 3: different phases of the installation of the first set of samples in the NEAR Irradiation Station.

Further developments include the realization of new irradiation channels and of additional irradiation positions to be dedicated to materials and electronics irradiations.

M.Ferrari et al., Design development and implementation of the NEAR area and its neutron irradiation station at the n_TOF facility at CERN, submitted for publication to the Journal of Nuclear Materials and Energy, (2022), http://arxiv.org/abs/2202.12809