Radiation Environment and Levels at the LHC

The Monitoring and Calculation Working Group (MCWG) within the R2E project is responsible for the characterisation of the radiation environment at the LHC accelerator (including its injector chain), with the goal of quantifying and mitigating the R2E risks for all potentially sensitive applications.&

The radiation levels are measured through four reference quantities, that quantify the risk of different types of lifetime failures and stochastic Single Event Effects. These different quantities are predicted via FLUKA simulations, and are also monitored during operation by using different types of detectors, namely Beam Loss Monitors (BLMs), RadMons and optical fibre dosimeters. The R2E-relevant quantities are listed in the table below, together with the associated monitoring and calculation tools.

Quantities of interest for radiation to electronics, and main tools used within the R2E project to measure and calculate them.

Run 2 monitoring at the LHC

A major activity of the MCWG group is to monitor the radiation levels during operation. For the LHC, two major reports have been distributed during Run 2, providing an overview of the measurements of the BLM and RadMon systems.

This report presents the TID levels measured with the BLM system along the LHC during proton-proton operation in Run 2, showing them separately for the four years of operation (2015, 2016, 2017, 2018) and for each Insertion Region (IR). The large number of BLM detectors (>3500) and their good time resolution allow to obtain a detailed map of the radiation levels, also providing the breakdown of the TID in different beam modes. In addition, the report provides the measured values of important operational parameters of the LHC, such as the integrated luminosity of the experiments and the integrated beam intensities, that can be used to normalise the radiation levels in different areas of the accelerator.

This work presents the measurement of High Energy Hadron (HEH) fluence with the RadMon system in Run 2, covering the 2015, 2016 and 2017 years of operation. Such measurements provide complementary information with respect to the one obtained from the BLMs, and cover several shielded alcoves hosting critical electronic equipment of the LHC. 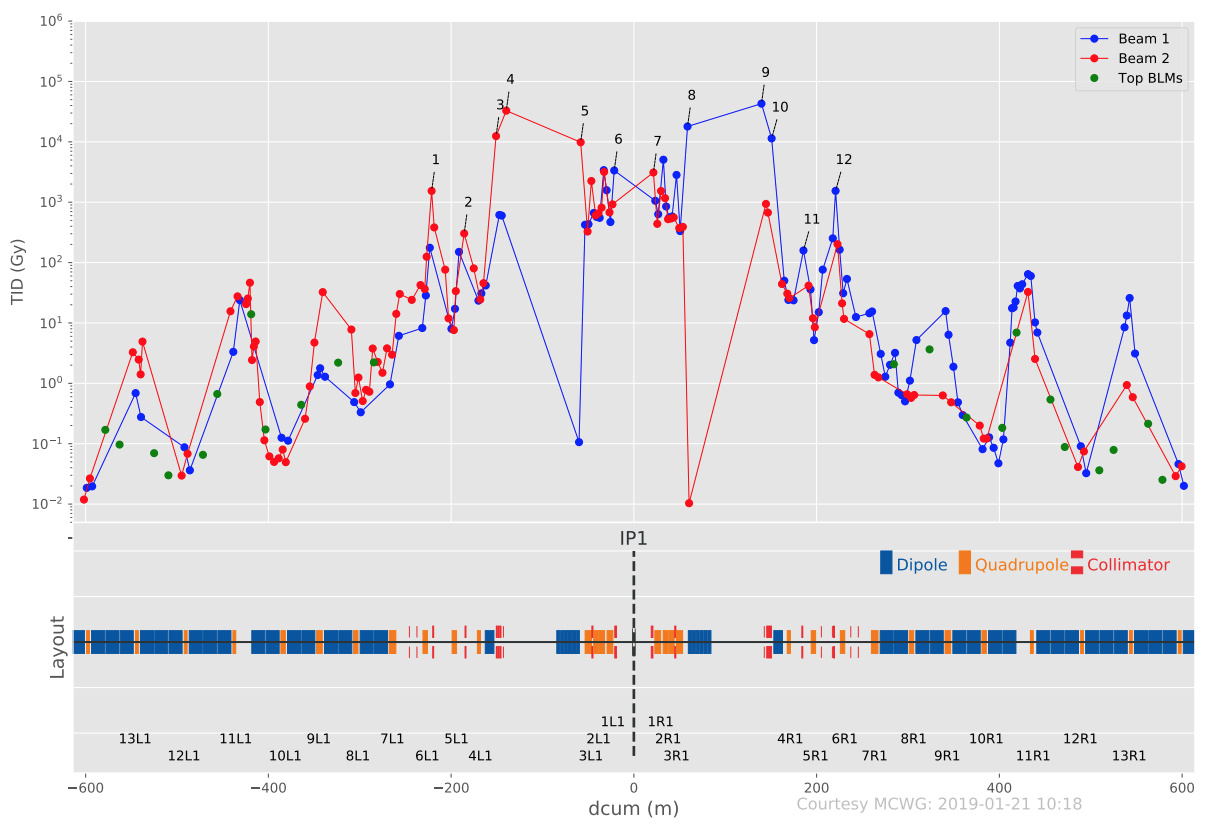 The MCWG is charge of providing radiation level specifications for the future years of operation of the LHC accelerator complex, with special focus on the High Luminosity upgrade, for which a dedicated document has been prepared (EDMS 2302154). The specifications are derived from a combination of Run 2 measurements from BLM and RadMon systems, FLUKA simulations and considerations on the expected evolution of the performance of the LHC. The results are presented for all relevant locations hosting systems based on commercial electronics, and should serve as reference for their development and qualification in line with the Radiation Hardness Assurance (RHA) procedure.