In order to briefly describe the R2E strategy, we will start with the origin of the project, in 2008, and for which the plot below (a top view of the CERN Neutrino to Gran Sasso – CNGS – target area) provides a very suitable illustration. 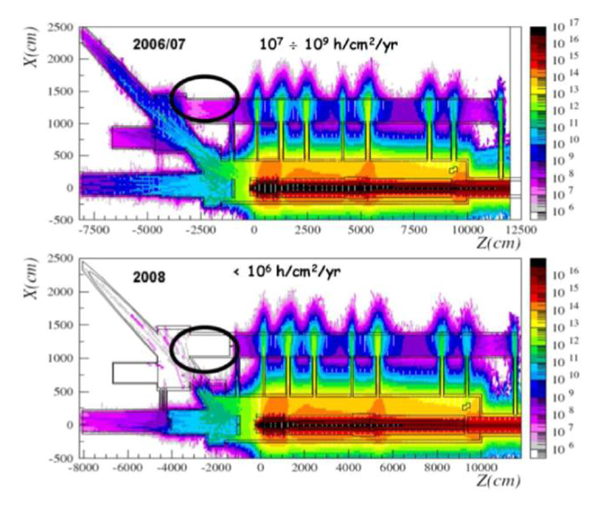 What we see in the top plot, encircled in black, is an area with high-energy particle (hadrons, in this case) radiation levels in the order of 108 per cm2 and year. Such levels, though not particularly threatening in terms of cumulative radiation damage in electronics, can still be problematic from a stochastic, Single Event Effect (SEE) perspective.

It turned out that equipment in this area, despite being relatively far away from the radiation source and partially protected with shielding, suffered from SEEs in a microcontroller in the (critical) ventilation system. This issue led several months of interruption in the scientific exploitation of the facility, and could only be solved with the installation of massive shielding reinforcements, leading to the radiation level reduction illustrated in the plot below.

This is one of many examples of how the combination of relatively low – but still several orders of magnitude larger than the cosmic neutron background at sea level – radiation levels and sensitive electronics in critical equipment can lead to significant downtime and large costs for overcoming the “radiation to electronics” threat and impact on the operation.

Similarly to the situation illustrated above, in its early operation days in 2011, the LHC accelerator also suffered from significant downtime due to radiation effects in electronics of critical systems. This is illustrated in the plot below, showing as a figure of merit of the radiation impact, the number of R2E dumps (i.e. non-programmed beam interruptions) as a function of the number of collisions produced in the LHC, and represented by the integral luminosity.

The strategy to tackle this issue was that of mitigating the R2E impact via shielding and relocation, in combination (when possible) with rapid upgrades of the installed systems, rendering them more radiation tolerant. Such approach was carefully planned and executed in order to mitigate as efficiently as possible, investing first in the areas or equipment for which a larger return was obtained from the point of view of the LHC machine performance.

The related improvements linked to the mitigation actions is manifested when comparing 2012 situation below with that in 2011. Such R2E mitigation activities continued during LS1 (2013-14), already in combination with the prevention measures (further described below) and after LS1, the challenging <0.5 dumps per inverse femtobarn target was achieved. 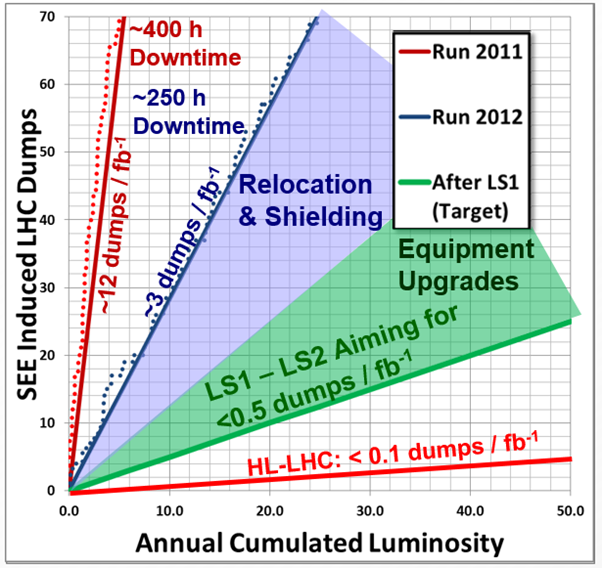 In doing so, mitigation was not sufficient, and critical radiation exposed systems in the accelerator started to be designed and qualified in order to be radiation tolerant. Hence, the R2E strategy shifted from mitigation to prevention, meaning that ideally, the related R2E measures are implemented during the design phase of a system, as opposed to after its deployment and start of operation.

Therefore, the present R2E strategy at CERN can be described as a combination of a provision of the necessary know-how and infrastructure for supporting the accelerator sector equipment groups in their radiation tolerant developments, as well as the responsibility of quality controlling the suitability of the achieved radiation response with regards to the specified targets, that in turn are set to ensure a successful operation of the accelerators.