Radiation testing is a key ingredient to CERN’s Radiation Hardness Assurance (RHA) approach. Indeed, commercial electronic components of similar characteristics can have a very different behavior when exposed to radiation, hence the importance of qualifying them, to select those tolerant to radiation, and reject parts with a weak response.

Component level radiation testing in the framework of Radiation to Electronics (R2E) is mainly performed using high-energy (200 MeV) proton beams, in the Paul Scherrer Institute (PSI), in Switzerland. These protons are capable of inducing all three type of effects on electronics: Total Ionizing Dose, Displacement Damage and Single Event Effects. Moreover, they do so in a way that is representative of the effects induced in the high-energy accelerator environment.

Qualification of electronic components within R2E is typically performed on demand of the equipment groups designing radiation tolerant systems for the accelerator. Roughly 80 different part references of all kinds (analogue, digital, mixed-signal) are tested per year during the approximately 500 hours of PSI beam time. Such tests are prepared, executed, analyzed and reported by the radiation effects engineers in the EN/SMM-RME section and Radiation Working Group (RADWG). More information about the component testing activity, as well as the possibility of requesting the test of components for CERN groups, and a database of tested components (with over 400 entries) is accessible here:  https://radwg.web.cern.ch/.

On top of the regular PSI testing, R2E also performs more sporadic radiation tests in facilities covering a broad variety of particles and energies also present in the accelerator environment, including thermal and atmospheric neutrons, heavy ions, electrons and pions.

In addition to the component level testing at PSI, system level tests of accelerator equipment are performed in the CHARM facility, at CERN (https://charm.web.cern.ch/). Testing at system level serves as final validation of the radiation tolerance of a given equipment, before its installation in the accelerator. 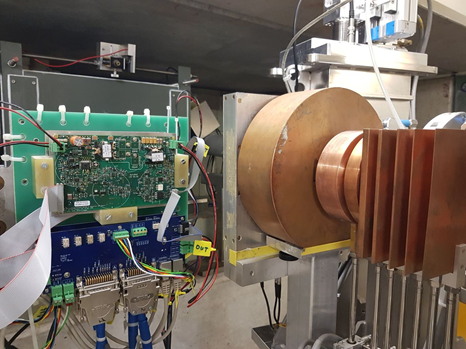