Investigating the exploitability of proton therapy centers at Quironsalud, Madrid 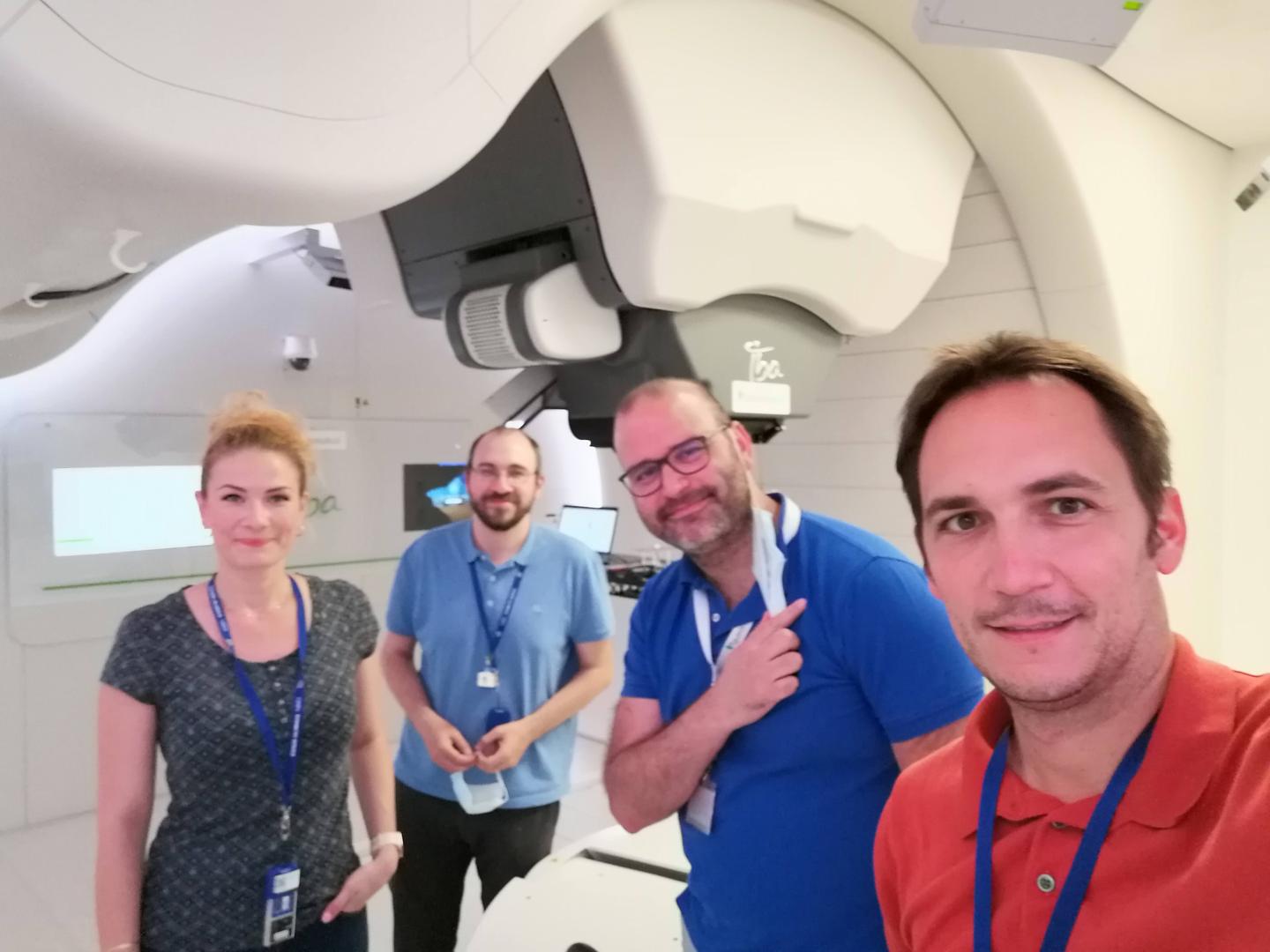 The R2E team in SY-STI-BMI has been looking for alternatives to perform proton testing and qualification of electronic devices for about one year.  Proton therapy centers represent a potential valuable alternative for radiation testing of electronics to the more standardized radiation research accelerator infrastructures with facilities and dosimetry tailored to radiation to electronics. The need for exploring their possibilities stands in increasing the accessibility to high-energy protons in Europe. Radiation research accelerator-wise, the present European capability is limited to the Paul Scherrer Institute (PSI), for which CERN has contractual engagement for about 12 test campaigns per year, and to the University Medical Center of Groningen (UMCG). Both research center, whereas having built beamlines specialized to radiation to electronics testing and relying on continuous cyclotron acceleration are strongly driven and financed by the medical physics activities.

Other than to increase the current level of accessibility, having and relying only on just two facilities for proton irradiation in Europe represent quite a risk in case of sudden shutdown, a situation that has occurred more than once in the United States. Therefore, opening new opportunities can alleviate the risk and also launch new collaboration opportunities.

Finally, the Quironsalud proton therapy center in Madrid, Spain, was selected to perform tests on golden chips and devices that have been previously tested at accelerator research labs widely used for electronics testing such as PSI and PARTREC. Rubén García Alía, Natalia Emriskova and Andrea Coronetti travelled to Madrid to perform the beam characterization and were welcome by Juan Antonio Vera Sanchez, who calibrated and operated the beam. 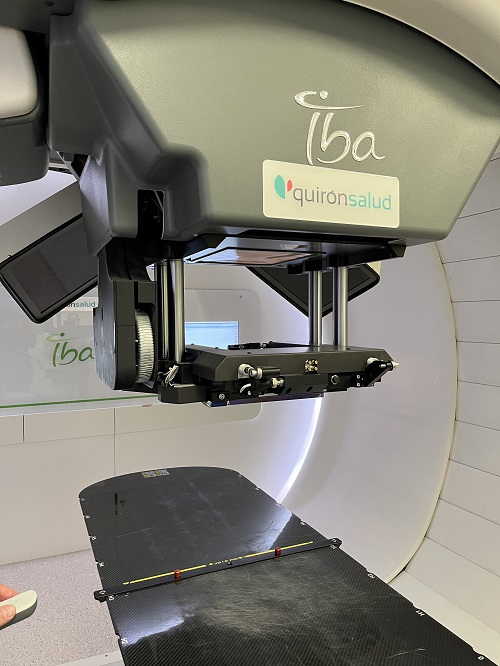 The test campaign was held on July 2nd, 2022 at the Quironsalud proton therapy center which hosts a synchocyclotron that is capable of accelerating protons in the 70-236 MeV energy range. Lower energy can, similarly to other facilities, be obtained by degradation. The flux cannot be tuned as easily as with the accelerators available at PSI or PARTREC, but it is nonetheless typically high enough (2x108-2x109 p/cm2/s depending on the beam energy) to enable electronics testing.

The golden chips that were tested previously at either PSI or PARTREC were mostly SRAMs. This included the ESA Monitor as well as some commercial SRAMs that have been tested in each and every beam before. The ESA Monitor also enable the nice feature of verifying the beam uniformity over a quite large surface. The beam was set to be as large as 3x3 cm2 and the ESA monitor confirmed that the beam was uniform over the entire surface of 2x2 cm2. 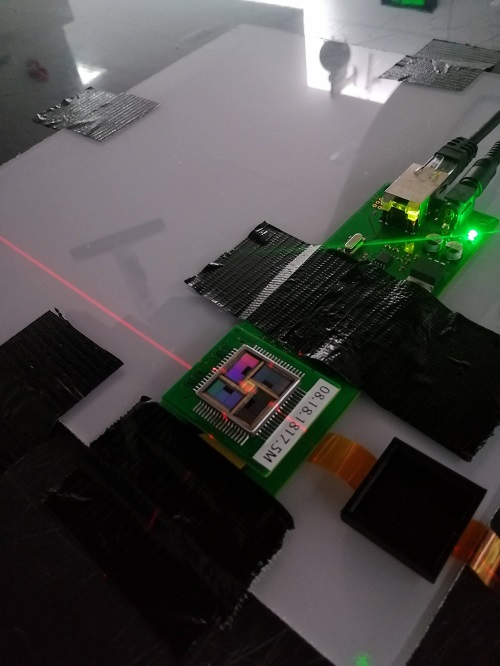 Apart from some initial confusion related to the conversion of monitor units (the flux unit of measurement for proton therapy) to protons/cm2/s (the one used in electronics testing), the tests on the various SRAM was meant at confirming that SEU cross-sections measured at Quironsalud would be compatible with those measured at PSI and PARTREC for a wide enough set of devices. The main source of difference, other than the fluence measurement instrumentation, could be the fact that, differently from PSI and PARTREC, where the beam is continuously accelerated by a cyclotron, at Quironsalud the beam is pulsed (7 us) and sweeped over the 3x3 cm2 surface with at 1 kHz frequency. The pulsed nature of the beam is a well known source of potential disruption in the operation of a memory device.

The test confirmed that the SEU cross-sections measured at Quironsalud are compatible within acceptable uncertainties (20%) with respect to those measured at PSI and PARTREC. The test also confirmed that no specific anomaly that was not previously seen at PSI or PARTREC would occur on the memories. 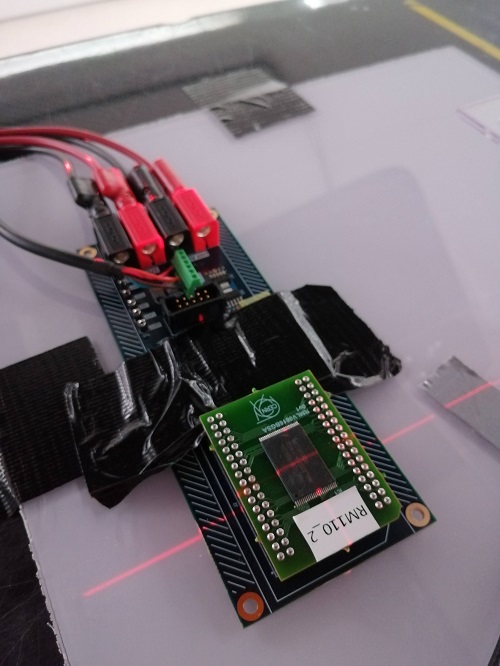 One of the commercial chip under test was a Renesas SRAM that is very SEE-resilient (as proven with atmospheric neutrons at ChipIr). The test, however, demonstrated its potential sensitivity to TID given that the two irradiated samples failed by stuck bits at a few hundreds of Gy(Si). 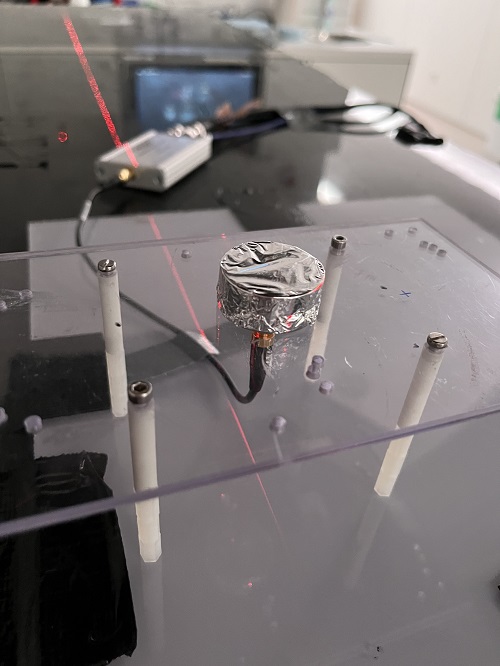 The outcome of the test campaign clearly indicate that the Quironsalud proton therapy center may be exploited in the future for the qualification of electronic devices used in the CERN LHC electronic equipment.