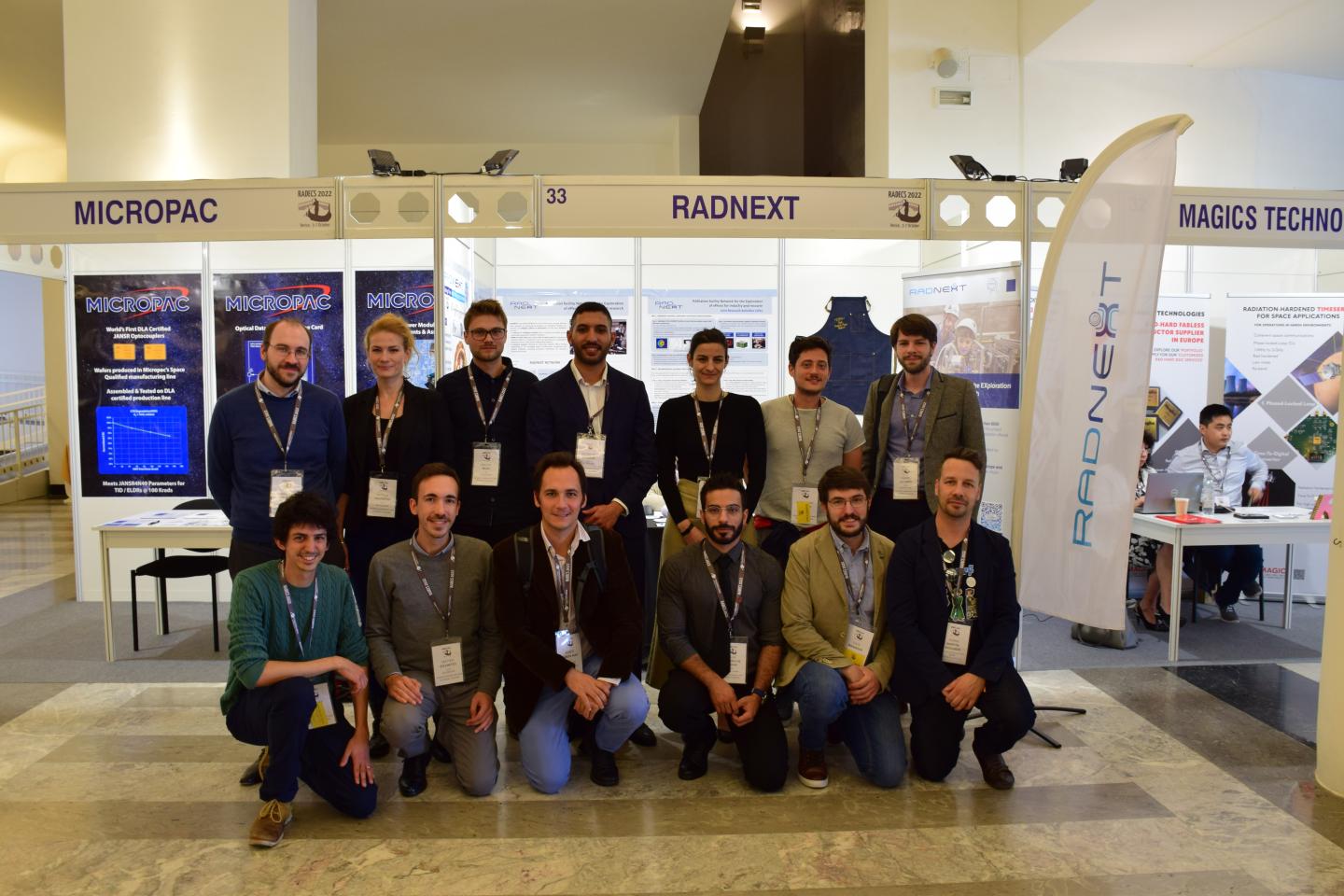 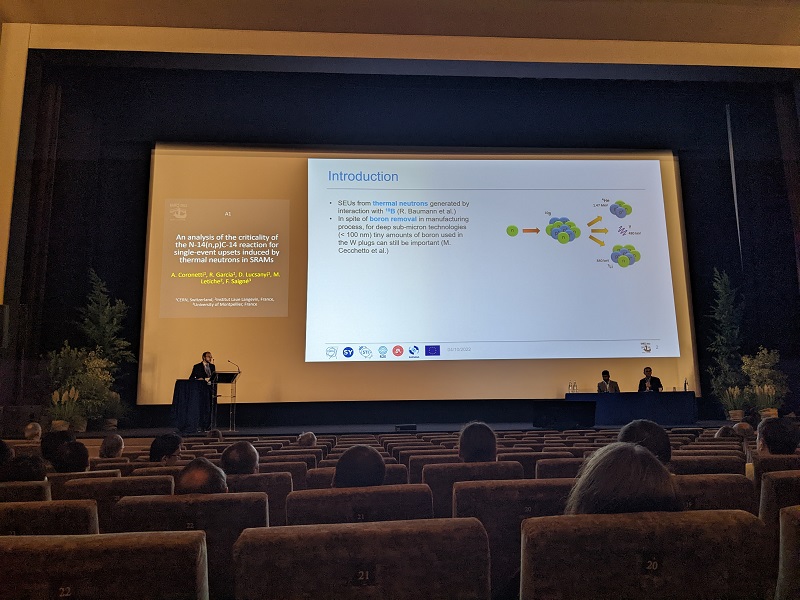 The very first talk of the technical session featured Andrea Coronetti presenting the work titled "An analysis of the criticality of the N-14(n,p)C-14 reaction for single-event upsets induced by thermal neutrons in SRAMs" in the Mechanisms and modelling of single-event effects session. 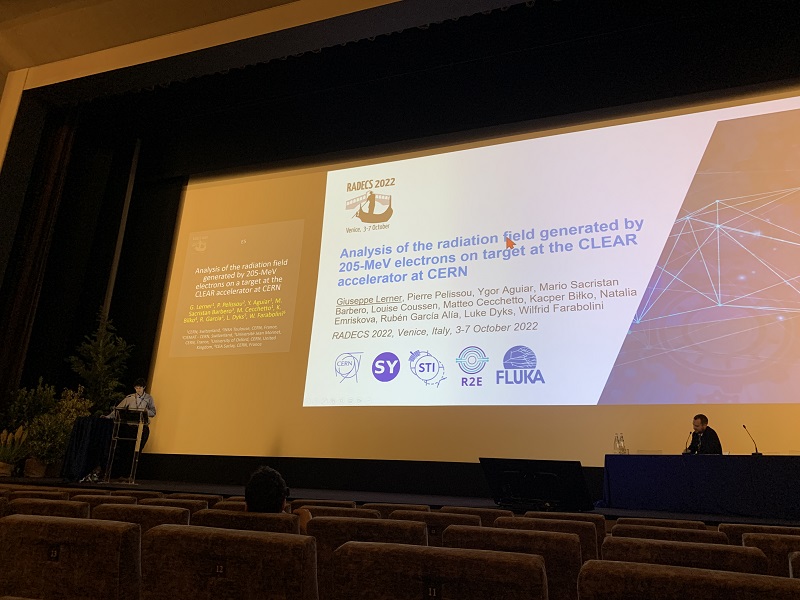 On Wednesday, Giuseppe Lerner closed the morning session presenting the paper titled "Analysis of the radiation field generated by 205-MeV electrons on a target at the CLEAR accelerator at CERN" in the Radiation Environment session.

Wednesday afternoon was also time for the poster session. R2E presented several posters during this 3 hours session that triggered great discussion with people from the international radiation effects community. 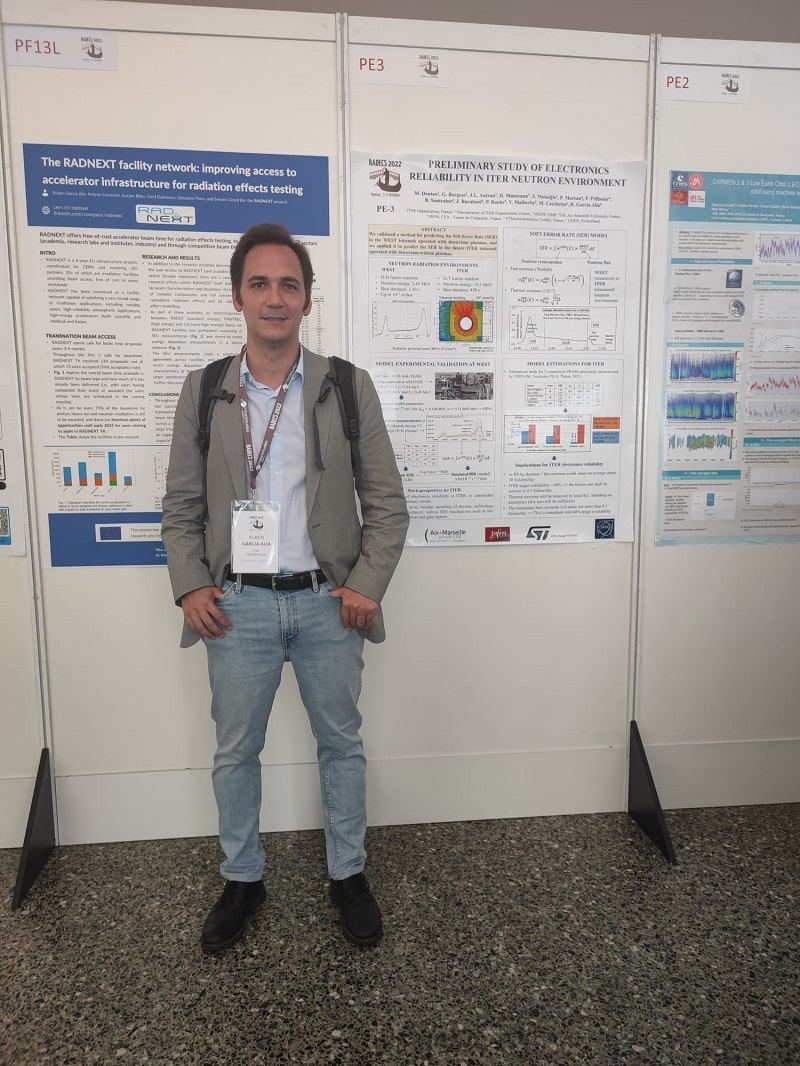 Rubén García Alía presented a poster about the RADNEXT network and a second one discussing the reliability of electronic equipment used at ITER (on behalf of Martin Dentan). 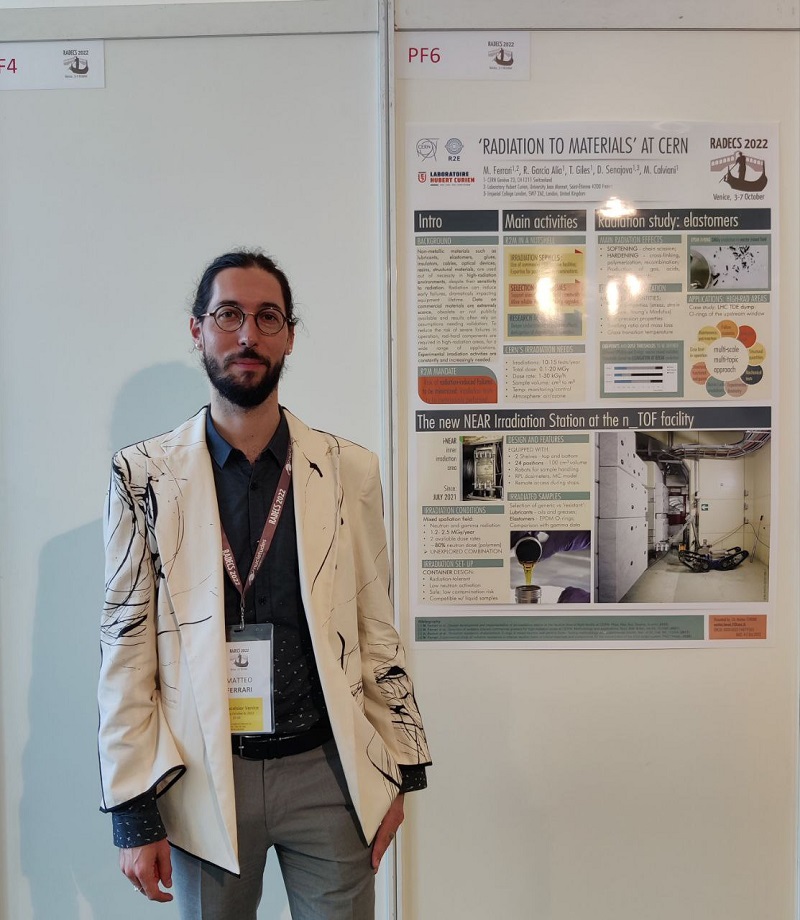 Matteo Ferrari, now Professor at Université Jean Monnet, presented a poster to show the activities of the Radiation to Materials (R2M) project at CERN. 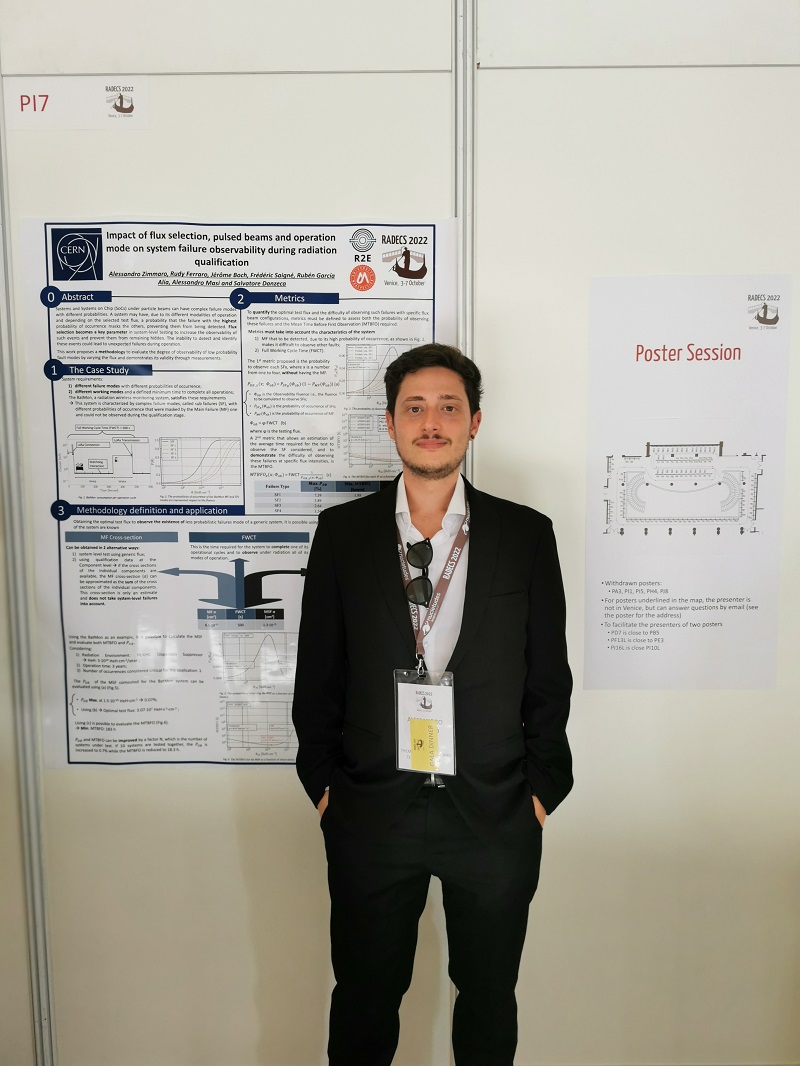 Alessandro Zimmaro presented a poster on the impact of the use of pulsed and high flux beams for the qualification of systems. 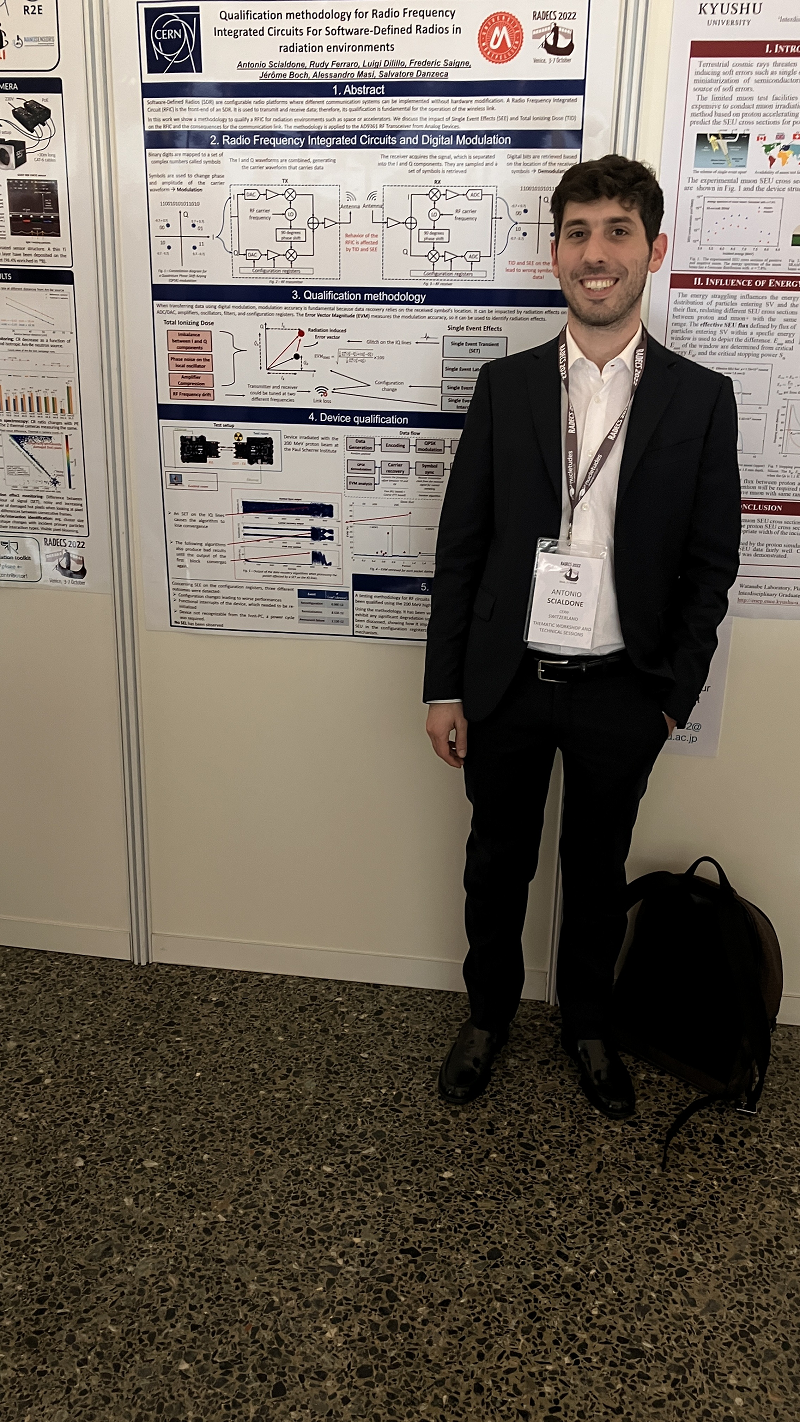 Antonio Scialdone presented a poster about the qualification of RF integrated circuits for operation within software defined radios. 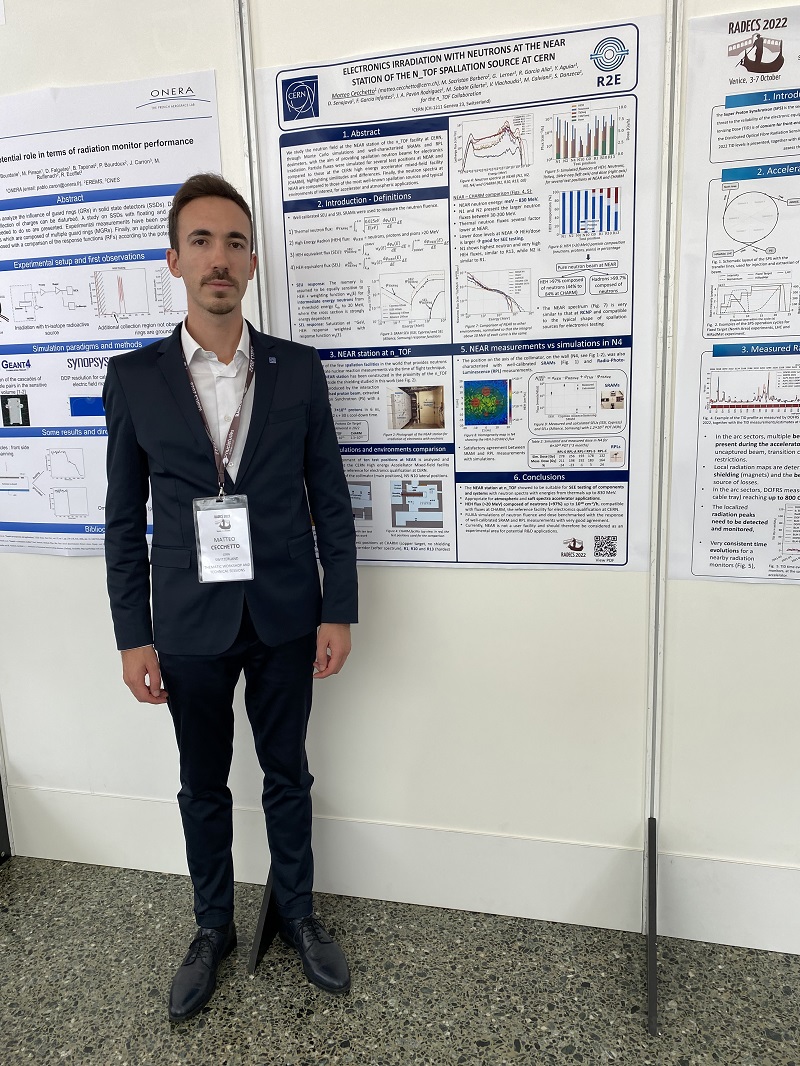 Matteo Cecchetto presented a poster about the exploitation of the nTOF NEAR test station at CERN for characterization of electronic devices under neutron fluxes. 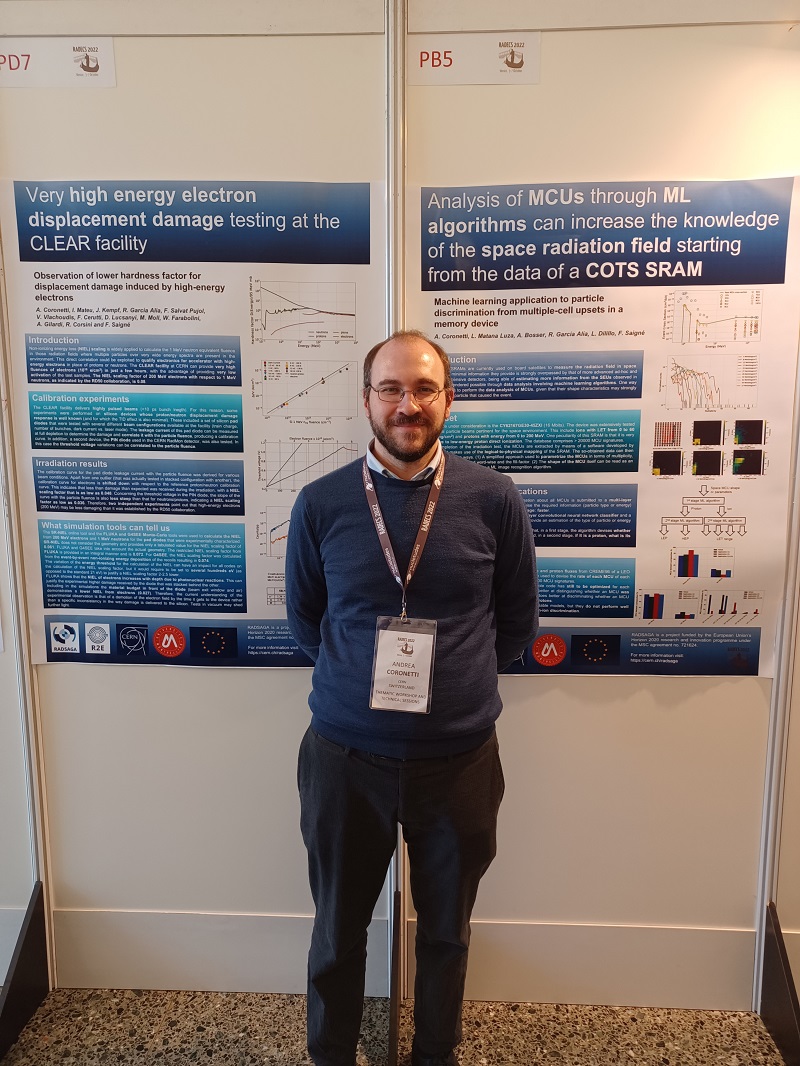 Andrea Coronetti presented two posters. The first concerned displacement damage testing at the CLEAR very high-energy electron facility at CERN. The second dealt with the use of multiple-cell upset data and machine learning algorithms to improve the knowledge of the space particle field starting from errors in a simple SRAM.

Kacper Bilko also presented a poster abou the measurements performed in the SPS accelerator and the related RHA implications.

Natalia Emriskova also prepared a poster about the CHIMERA activities, i.e., the development of high-energy heavy ion testing capabilities at the CHARM facilities that was exposed at the RADNEXT booth. Pedro Martín Holgado prepared and ran the "best pizzaiolo" game at the RADNEXT booth, that had a huge success and assigned 3 RADNEXT branded cooking aprons to the winners.

Ygor Aguiar has served has social media manager for the RADECS 2022 event. David Lucsanyi has promoted within the community the now open source tool G4SEE for Monte-Carlo simulations of radiation effects in electronics.